Today (28th September) is the Feast of St Conval, the patron saint of Cumnock parish. We are grateful to Gilbert Márkus for providing this guest-blog about the saint and his historical associations.

In 1384 Alan of Cathcart was having a ‘cash-flow problem’.   So he entered into an agreement with a certain Roger Crawford: Alan handed over to Roger various of his lands in Ayrshire, for which Roger paid him £46 13s. 4d. on the understanding that Roger could enjoy the lands and their rents in the meantime, but when Alan’s problems were resolved Roger could expect him to come back and repay the sum and reclaim his lands: ‘one Sunday between sunrise and sunset on the Sunday following the feast of the Birthday of John the Baptist, and should pay, on the high altar of the Church of St Conval of Cumnock’.[1]

This was the medieval church of Cumnock, serving a large parish which was subdivided centuries later into the two modern parishes of Old Cumnock and New Cumnock.  In this blog I want to think a bit about the dedication of the parish church to Sanctus Convallus.  We should also bear in mind that the Connell Burn (now in New Cumnock) probably also contains his name: Conval > Connel/Conall is a relatively common change, as seen in Kirkconnel for example.

Conval himself, as a historical saint, is a bit of a riddle.  We know virtually nothing about him until he appears in late medieval writing, probably about nine centuries after he died.  These writings are interesting, but their interest lies in what they tell us about the people who wrote them; not in what they tell us about Conval himself.  We will come back to those later writers, and what they may have had in mind, in due course.

Even the name Conval is problematic.  It appears in medieval Latin writings (like the charter we mentioned above) as Convuallus.  It is certainly a Celtic name in origin (i.e. either British or Gaelic), but there are two sets of names which it may come from, and these can be hard to tell apart from their later appearances.   One is early Common Celtic *Cunoualos, which means ‘mighty hound’.  That name became Cynwal in Welsh, and Conuall (later Conall) in Gaelic, and either of these might have been rendered in Latin as Convallus.   But there is another name in early Common Celtic, *Cunomaglos ‘hound lord’, which became Welsh Cynfael and Gaelic Conmáel (the Welsh f and the Gaelic m were both pronounced as a /v/), and again a Latin scribe might render the name as Convallus.  So the Latin forms don’t help us much.  We don’t know what his true name was.  Nor do we know whether British or Gaelic was his native tongue.  You might think that that’s not a very good start for a historical enquiry.

One useful way of approaching a saint is to consider where his or her cult appears in place-names, and especially in church dedications (which are a particular kind of place-name).  There is an extremely well-defined distribution of Conval-dedications in Scottish churches and chapels.   This map is generated by the Unioversity of Glasgow’s web-resource, Saints in Scottish Place-Names.  Look how the dedications of churches and chapels to Conval are clustered in the south-west.  There are none north of the Clyde (though there are a couple of possible commemorations of him in an island name, a well and a burn, but they are not certain, and they are not churches).  There are no Conval dedications at all east of Eskdale, either. 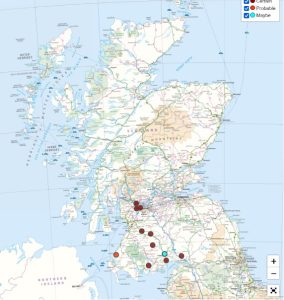 This remarkable clustering of Conval dedications may of course refer to more than one saint of that name.  Some of the local stories and features of the Conval cults in these places are rather different from each other.  Does that mean that there were different saints behind the Conval dedications?   Probably not.  It is much more likely that a single Saint Conval underlies them all, but devotion and curiosity and sheer human creativity in local communities created ever more stories, and these localised cults took on different shapes in different places.

Another thing to notice about the Conval churches is that all of them were in the medieval Archdiocese of Glasgow, though there was one possible chapel in the parish of Tongland, the southernmost, in Galloway diocese.[2]   In the twelfth century, when Earl David, later King David I of Scots, established (or re-established?) a cathedral in Glasgow he intended it to rule over the churches of Cumbria.  This self-consciously British-speaking historical territory was at that time gradually being absorbed into the realm of the kings of Scots and David played a key role in that process.  Gradually expanding his core territory, David pushed politically and ecclesiastically into the neighbouring territories of the Gall-Ghàidheil (a Gaelic-speaking polity with Norse historical and political leanings[3]) and of Britons.  The church of Inchinnan and its surrounding lordship of Strathgryfe were taken over from Gall-Ghàidheil control, as were the territories of Ayrshire little by little.

One rather surprising feature of this process is what happened at Inchinnan.   The name of that church is evidently ‘island or haugh of [Saint] Finnian’.  Finnian (aka Winnin, Finnio et al) was another important saint of south-west Scotland, also culted at Kilwinning and Kirkgunzeon for example.  But in the later middle ages, in spite of the obvious meaning of the name Inchinnan, it was the cult of St Conval which was celebrated there.  It was Conval whose stone (on which he had miraculously sailed over from Ireland) was parked in the grounds of Inchinnan church and attracted sick people to its healing power.  It was Saint Conval whose feastday was celebrated at Inchinnan, not Saint Finnian.   Except that Conval was celebrated at Inchinnan on 28th September which in the ancient martyrologies is the feast of Saint Finnian, not of Saint Conval.  It looks as if the church of Inchinnan changed its patron saint, but forgot to change its name (it could have re-named itself Inischonaill) and also forgot to change its annual feast-day to that of St Conval.

That change of dedication at Inchinnan, from Finnian to Conval, may have been part of Glasgow’s gradual encroachment on the churches of the Gall-Ghàidheil.  For the patron saint of Glasgow was Kentigern (or affectionately Mungo), supposedly its founding bishop, as twelfth-century lives tell the story.  And the late medieval dossier of St Conval has him as a disciple of Kentigern.  This is how the Aberdeen Breviary recounted his story:  ‘[Conval] travelled around monasteries and cloisters, seeking a worthy man to whom he could submit himself to be imbued with the discipline of regular life.  For he heard that St Kentigern the bishop was endowed with holiness above all others.  Coming to him, he became his disciple.’[4]

This is all rather speculative – necessarily so.  It may be that the Conval dedications have other and earlier associations with this territory and with each other.  It might be that they once formed a familia (a group of allied monastic churches) whose mother-house may have been one of the Conval dedications which still survive.  Even if that were the case, however, the expansionist energy of the Glasgow archdiocese absorbed them, and by telling the story of Conval’s submission to Kentigern they brought them into the desired relationship with Kentigern’s successor, the archbishop of Glasgow.

For a more in-depth discussion of the cult of Conval and the expansion of the Glasgow archdiocese, see Gilbert Márkus, Rock-Rider: St Conval and his Church at Inchinnan (Inchinnan, 2018).[5]

[2] This appears to have been the name of a small chapel, not of a parish church.  It is quite lost now, but its former existence may be inferred from the name of the farm of Kirkconnel, which we may assume took its name from the supposed chapel.

[4]  Alan Macquarrie (ed.), Legends of Scottish Saints: Readings, hymns and prayers for the commemorations of Scottish saints in the Aberdeen Breviary (Dublin, 2012), 238-9.